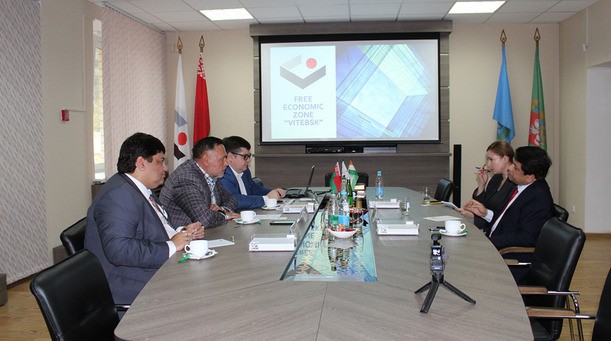 The ambassador is on a two-day trip to Vitebsk Oblast. In the FEZ Vitebsk administration he was made familiar with peculiarities of operation and the incentives available in Belarusian free economic zones. He evaluated the economic potential and the logistic potential of FEZ Vitebsk. A package of investment proposals was handed over to the ambassador. The package included promising projects in various branches of the economy that have been worked out and are suggested for implementation in free economic zones in Vitebsk Oblast with assistance of Indian capital.

Potential partners are invited to participate in the establishment of a hot-dip galvanizing enterprise. Hot-dip galvanizing is believed to be one of the most frugal and popular methods of protecting metals from corrosion. The production of equipment for laser surgery through reliance on cutting-edge technologies is another option. The production of industrial lasers for cutting, welding, and marking metals is another project. The promising projects also include the production of light-emitting diodes based on nanostructured composite shielding materials.

Mikhail Skurat explained: “We've asked the ambassador to help with the review of the matters concerning financial aspects of the investment projects and help with finding partners for their implementation. In turn, we are ready to get Belarusian businessmen involved, including for the sake of setting up joint ventures.” An industrial cluster may be set up in FEZ Vitebsk in the future. It could include interrelated enterprises with a common specialization, the head of the FEZ Vitebsk administration added.

The first resident company involving Indian capital – OOO Belmatch – was registered in FEZ Vitebsk in 2020 with an investment project that envisages the production of match sticks. The designing of the manufacturing site is nearing completion. Construction is supposed to begin in spring 2022. The possibility of implementing an accompanying project to make packaging for matches is being explored.

In January-June 2021 trade turnover between FEZ Vitebsk resident companies and partners from India exceeded $2 million, more than 6 times up from January-June 2020 primarily thanks to export. OAO Polotsk-Steklovolokno, which sells glass fiber cloth to India, was the main contributor.

A total of 54 investment projects involving investors from 14 countries, including Germany, Czechia, Russia, Poland, Lithuania, UK, Israel, Cyprus, Spain, are being implemented in FEZ Vitebsk. FEZ Vitebsk comprises 16 sectors with the total area of nearly 2,800ha, including eight located in Vitebsk, five in Orsha District, and one in Novopolotsk, Postavy, and Postavy District each.